Ethan, Todd, and Lucas are three street kids in The NeverEnding Story.

They live in the city of De Forest, Washington, and frequently torment Bastian.

These bullies only appear in the first film.

It is presumed these boys go to the same school as Bastian Bux.

The bullies show up at the beginning of the film, when Bastian is walking through downtown. They approach him and demand cash; he runs off, and they chase him down an alleyway. When they finally catch up to him and mug him, they realize he doesn't have any money, so they throw him into a garbage dumpster.

When Bastian gets out of the garbage dumpster, he runs into them again, and, threatening to throw him into the dumpster again, they give chase again, but lose him when he hides in K. Koreander's Antique Bookstore.

The bullies appear again at the end of the film, when they see Bastian riding Falkor, who proceeds to chase them. Terrified, they run down the exact same alley they had chased Bastian into at the beginning of the film. Lucas gets knocked out when he trips on some garbage, while Ethan and Todd seek refuge in the same garbage dumpster they had thrown Bastian into.

He wears a blue denim shirt with bottle cap badges, a yellow-and-blue plaid flannel button-down shirt, a white t-shirt with Freddy Krueger (from A Nightmare on Elm Street) on it, a blue backpack, black jeans, and black-and-white Nike sneakers.

He wears a red baseball cap, a white, blue, and yellow zip-up jacket with bottle cap badges, a red-and-white t-shirt with a red collar and v-shape at the throat, a black backpack, blue jeans, and silver sneakers with red soles. 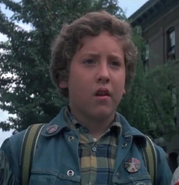 Lucas
Add a photo to this gallery
Retrieved from "https://theneverendingstory.fandom.com/wiki/Ethan,_Todd,_and_Lucas?oldid=5115"
Community content is available under CC-BY-SA unless otherwise noted.